Details of the Statue Of Unity :

Statue of Unity is the tribute to Sardar Vallabhbhai Patel (1875–1950) who was the first Home minister of India and highly respected for his leadership in uniting the 562 princely states of India to form the single large Union of India. Statue of Unity is the world’s tallest statue with a height of 182 metres (597 ft). 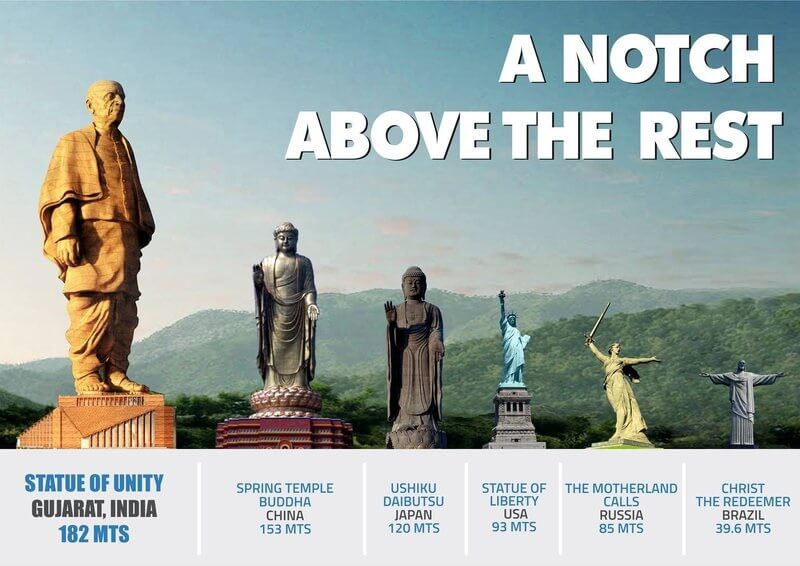 It was designed by Indian sculptor Ram V. Sutar, construction of statue started in October 2013 by Larsen & Toubro, and was inaugurated by PM Narendra Modi on 31 October 2018, the 143rd anniversary of Patel’s birth.

Some Interesting facts about the Statue of Unity :

After the darshan at Somnath temple we started our journey to Vadodara . We reached Vadodara by evening and checked into the room booked there for next two days.After dinner we retired for the day as we need to raise early to go to Statue of Unity .

Day 7 We started the journey around 6 a.m and reached the Statue of Unity site in Kevadia around 8 a.m. We booked the tickets online for 9 a.m slot. After parking the car , we need to travel in the shuttle bus around 5-6 kms to reach the statue of unity site.The Shuttle buses start around 8.30 a.m. We took the first bus to reach the site which is not much crowded . Initial one hour the buses are mostly free after that the crowd builds up especially on weekends .

We covered the Viewing gallery view(From inside the Statue), SOU site , Museum & Audio Visual Gallery by 10:30 a.m. After that we had the breakfast at the foodcourt there. By that time we  can see the queue at the museum and lift for  Viewing gallery view swell to 400-500 people. It would be prudent to book tickets for 9 a.m. slot as things we can cover in 1-2 hours in the morning will take atleast 3-4 hours later.

Visit to Valley of Flowers and Sardar Sarovar dam :

After seeing the Dam we took shuttle back to the car parking. By the time we reach there we see more than 500 people waiting for the shuttle bus.In weekends if we go in the afternoon we  may have to wait longer times just for getting into the shuttle bus itself so the best time to visit SOU is in the 9 a.m slot.

Considering it was just 2 months old and from the initial estimates of 5000 visitors per day to actual visitors of more than 30,000 , the amount of scale-up that needs to be done in the short period is humongous . The scaling up of the infra and maintaining the cleanliness with such a huge crowd in such a short period is very impressive .

We started our journey back to Vadodara and reach the hotel room by 6 p.m. After that we went to the famous Vadodara bus station and shopping complex , did some shopping there. One question that always comes to my mind when I see any bus station in any city is , why won’t they do something like this. Bus stations are generally very crowded and poorly maintained , Shopping complexes are neatly maintained and needs crowd for their operations.Its a win-win situation for both to come together. After Shopping at the the bus station and dinner we retired for the day.

We concluded our Gujarat tour with this and the journey back to home . we took a break for the night at Karad, Maharastra  on Day 8 and reached home 5 mins before the year 2019 begins.

P.S Some thoughts on criticism of Statue of Unity (not related to Travel) :

Why Statue of Unity is the best Investment made by the Government :

Keynesian Economics : John Maynard Keynes suggested that “the Government should have people dig up holes and then fill them up”. What at first seems like a wild idea, may have had some logic behind it. Keynes believed that an initial injection into the economy could stimulate economic growth. Digging up holes and filling them up again seems pointless, and is, except that it gives money to people, which they then go and spend, increasing aggregate demand – leading to economic growth. This effect is known as a “multiplier” effect – an initial investment leads to a greater than proportional increase in national income/product/output. This has been sucessfully used to come out of recessions many times in the West

In India we have  Mahatma Gandhi National Rural Employment Guarantee Act (MGNREGA) which has budget allocation of more than 60000 crores, which basically operates on this principle.There was no measurable outcome from the money spent here except employment generation. This was introduced in 2005 and with huge budget allocations every year. You seldom here any one question about the outcome and the return on investment etc. of MGNREGA .

If you consider the Statue of Unity , say primarily it will create employment for the people for construction and also in the sectors that supply material to the project till it’s in construction phase. Second after construction provide employment in service sectors like for transport vehicles , food courts and support staff at the site etc. Third it will generate income directly from tickets sold, and indirectly from the amount spent on food , travel (and related activities like purchase of diesel etc) and Hotel rooms etc. I am sure in the days to come it can even start a service sector eco-system (like construction of hotels etc) near the site, which will again feed into the loop of economic activity. So Instead of spending more money on MGNREGA kind of  projects where there is no measurable outcome , Govt should spend money on the projects where the outcome can be measured.

One day Tour to Kolar – Trekking in Antharagange

Details of Antharagange: Antharagange is a rocky mountain located near Kolar . It is around 2…